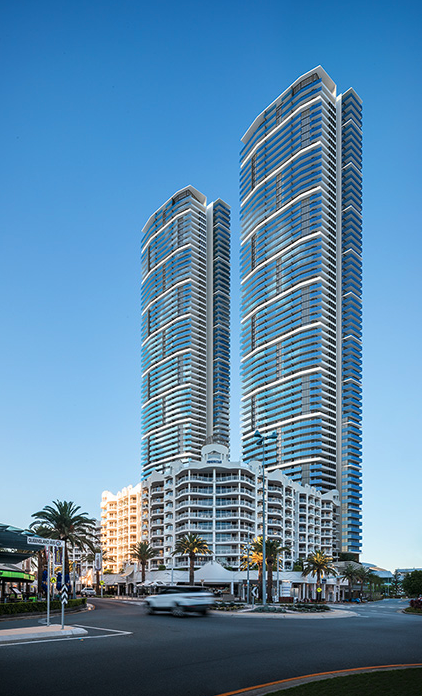 A veteran developer is gaining interest from hotel investors for his $700 million twin-tower project across the road from the Gold Coast Convention and Exhibition Centre in Broadbeach.

VETERAN developer John Potter is hoping to secure funds from hotel investors for his $700 million twin-tower project across the road from the Gold Coast Convention and Exhibition Centre in Broadbeach.

Mr Potter late last year filed a material change of use to alter approved plans for the planned high-density tower across the road from the convention centre.

Under the new plans, the single-story row of shops would be replaced by not one 50-level tower but two 67-level towers with room for nearly 1500 residents to open by 2022.

The changes were approved by the Gold Coast City Council earlier this week, albeit in a slightly modified form with 458 residential units rather than the 506 in the original plan.

Craig Perry, who is project manager for Central on Broadbeach, said several hotel investors have approached them interested in the hotel component of the project.

That is the 418 one-bedroom serviced apartments that average 66sq m and would sit below the residential units in the complex.

He said the project has the advantage of being located across the road from the convention centre, which is highly attractive to hotel operators.

It also comes as political and business leaders place pressure on the State Government to revamp the convention centre by moving on a stalled $85 million upgrade.

Mr Perry conceded many planned large developments to do not make it to construction, however, he said, Central on Broadbeach is a “AAA” project.

“I think projects that are AAA will get off the ground,” he said.

“This is a large project, but location wise that hotel component is sought after and that will allow it to move forward. It is crucial for the project as a whole.”

Mr Perry said the accommodation market on the Gold Coast continues to grow, with increasing numbers of inbound Chinese tourists.

The Central on Broadbeach plans also include 1704sq m of retail and 600sq m of office space located on the ground floor and levels one and two.

“It is something I do support,” Cr Taylor said.

“Main Place does need tidying up, they are all old buildings there.”

Mr Potter owns shops and offices that run for two-thirds of the length of the 1970s-built Main Place retail and dining strip on a 3275sq m site, which is parallel to the Gold Coast Highway.

He spent $39 million assembling the holding between 2004 and 2008 and later gained approval for the 50-level mixed-use tower with retail, offices, hotel rooms and apartments.

Mr Potter has repeatedly tried to sell the site and reportedly fielded an offer from a Chinese buyer for $50 million for the property in 2015.

The project is not without controversy with some tenants in the retail strip objecting to the redevelopment.

Vape Haven owners Octavian Voegele and Karsten Kobbing last year said they would not survive during construction of such a big project.

“I like how old-school Broadbeach looks now, it’s for the locals, whereas Surfers Paradise is for the tourists,” Mr Kobbing said.